Fairly quiet Monday with the US markets closed; I wonder every year why we can’t be in synch and have Victoria Day and Memorial Day fall on the same weekend.

I read somewhere today that Memorial Day was originally observed as a holiday to commemorate soldiers who fell in the Civil War, 1861-1865, but now honors all those killed in war.  Such profound loss…

OK, this is reassuring to many of us with lots on our mind….life happens:  President Obama signed the guest book at Westminster Abbey last week – the year 2008: 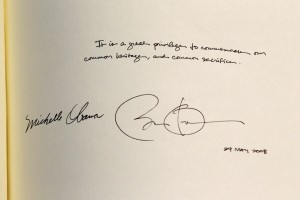 A detailed view of the page written by US President Barack Obama, in Westminster Abbey’s Distinguished Visitor’s Book shows the incorrect date 24 May 2008. (Oli Scarff/Getty Images)

The Standard & Poor’s/TSX Composite Index increased 32.07 points, or 0.2 percent, to 13,829.66. Equities also gained after Canada’s first-quarter economic growth accelerated to the fastest pace in a year.

“A lot of the commodities and commodity-related stocks were in an oversold position,” said Timothy Lazaris, chief executive officer of Red Sky Capital Management Ltd. in Toronto, which oversees C$52 million ($53 million). “With $100 crude, it’s not that difficult to see why people would be interested in buying some large-cap energy stocks who have been underperforming.”

The S&P/TSX rose 3.1 percent in the two weeks that ended May 27 for the biggest two-week gain since Feb. 4. Raw-materials stocks surged 7 percent and energy companies gained 4.1 percent as analysts at banks including Deutsche Bank AG, Goldman Sachs Group Inc. and JPMorgan Chase & Co. forecast a rebound in commodity prices and gold, copper, corn, wheat and natural gas advanced. The resources industry makes up 49 percent of Canadian stocks by market value, according to Bloomberg data.

Canadian stocks rallied after the national economy grew at an annualized rate of 3.9 percent in the first quarter, Statistics Canada said today. Analysts had forecast a gross domestic product increase of 4 percent, according to the median of 28 estimates in a Bloomberg survey.

Equinox, which Barrick Gold Corp. agreed to buy, advanced 4.5 percent to C$7.94 on the Toronto Stock Exchange. The shares plunged to C$7.60, from C$8.09 the prior day, on May 27 after Barrick said talks with the Zambian government on the takeover are continuing. The African country’s competition agency had said it conditionally approved the purchase.

The companies should have “no cause for concern” over those conditions, Maxwell Mwale, Zambia’s mines minister, said in an interview in the capital of Lusaka.

Cameco lost 3.3 percent to C$27.36. Uranium One Inc., a mining company controlled by Moscow-based ARMZ Uranium Holding Co., slipped 2.6 percent to C$3.70. Merkel promised when re- elected in 2009 to extend the life of nuclear reactors. Her party finished behind the Green Party in a state election for the first time following Japan’s earthquake and tsunami in March that caused the worst nuclear crisis since 1986.

Semafo Inc., which mines gold in Africa, climbed for an eighth day, soaring 4.8 percent to C$8.96 before the release of its first-quarter earnings.

“We see a lot of room for further appreciation as the company continues to provide updates on its underground development program and regional exploration updates,” Stuart McDougall, an analyst at Jennings Capital Inc., said in a note to clients.

S&P/TSX fertilizer producers climbed for a fifth day after 23 of 29 traders in a Bloomberg survey forecast corn prices will rise this week. Potash Corp. of Saskatchewan Inc., the world’s largest fertilizer producer, increased 0.8 percent to C$55.13.

The S&P/TSX Utilities Index fell 1.1 percent, the most since April 7.

Canadian Utilities Ltd., the owner of the Atco family of companies, lost 2.3 percent to C$58.

Juan Plessis, an analyst at Canaccord Financial Inc., cut his rating on the shares to “hold” from “buy” in a note dated May 27. Plessis cited the stock’s 21 percent surge from March 14 to May 26.

Directory publisher Yellow Media Inc. retreated for a sixth day, slumping 6.4 percent to a record-low C$3.83 after Adam Shine, an analyst at National Bank of Canada, cut his 12-month share-price estimate to C$4 from C$5.

“The company will report what we expect will be another relatively soft quarter when it reports Q2 results in early August and concurrently updates 2011 guidance, which will reflect a third consecutive year of downward revisions,” Shine wrote in a note to clients.

The human voice can never reach the distance

that is covered by the still small voice of conscience.

Love all, trust a few.

Do wrong to none.