Off to Art in Bloom again tonight….the Art Gallery and gardening community has been hosting seminars/lectures this week about two of my favorite topics.  Last night we heard Dominique Browning’s lecture on the healing capacity of creating a garden.  Tonight, Thomas Hobb’s spins his magic in another presentation.…a few more before it’s over so check it out!

photos of the day 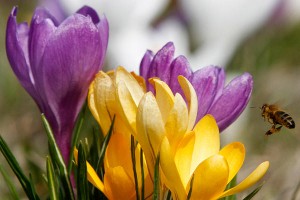 A bee flies to a crocus flower on a warm, sunny early spring day in Warsaw, Poland when temperature of 63 degrees Fahrenheit were recorded. 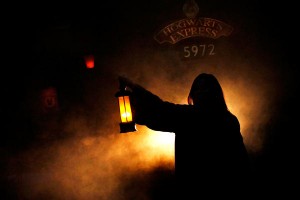 A woman holds a lantern at the entrance to the ‘Harry Potter: The Exhibition’ during a preview in New York. The exhibit will open to the public on April 1.

Bombardier Inc., the maker of trains and airplanes, jumped 13 percent after reporting earnings that topped the average of 20 analyst estimates by 43 percent, excluding certain items.

“Oil’s up because people are expecting good jobs numbers,” said Paul Ma, who manages C$500 million ($514 million) as a money manager at McLean & Partners in Calgary.

“Economic growth is up, people drive more cars. Gold is up because of inflation. When there’s inflation, where do people go? Gold.”

The index has gained 5 percent this year as the Canadian and U.S. economies expanded and oil prices surged 17 percent on unrest in the Middle East. The equity benchmark slipped 0.1 percent for the month, ending a streak of eight monthly advances.

In addition to reporting its biggest quarterly profit in two years, Bombardier said today it won a A$269 million ($278 million) train contract from the government of South Australia.

Bankers Petroleum Ltd., which produces oil and gas in Albania, surged 7.1 percent to C$8.70 after agreeing to pay $34 million to take over 140 wells from Albpetrol Sh.A.

Precious-metals producers climbed after the European Union said consumer prices rose the most in more than two years in March. Bond yields increased in Ireland, Spain, Portugal and Greece.

Rubicon Minerals Corp., which explores for gold in Ontario, soared 16 percent to C$5.02 after releasing a resource estimate.

Osisko Mining Corp., which is developing a gold project in Quebec, dropped 3.8 percent to C$13.96 after saying 2011-12 production may be lower than it previously forecast.

Central banks’ asset-purchasing programs, known as quantitative easing, were the stimulus for the S&P/TSX’s streak of increases, Ma said.

“Quantitative easing, whether from Japan, from Europe, from London or from the Fed, 100 percent of the time lifts the market up,” he said. When the Fed announced a second round of easing in November, “we put all our money in. We went pedal to the metal.”

The Dow average dropped 30.88 points, or 0.3 percent, to 12,319.73 today. Stocks extended losses late in the session as Fed Bank of Minneapolis President Narayana Kocherlakota told the Wall Street Journal that policy makers may have to lift rates to fight inflation.

“That kind of brought the market back to reality,” Michael Nasto, senior trader at U.S. Global Investors Inc., which manages $3 billion in San Antonio, Texas, said of Kocherlakota’s comments. “We had a negative tone set. It’s another example of people being a little bit timid about going to the market simply because of what they’re hearing.”

Portugal reported a budget deficit of 8.6 percent of gross domestic product last year, higher than a government target of about 7 percent. In the U.S., jobless claims topped economist estimates a day before the Labor Department’s monthly labor data.

The S&P 500 usually climbs further following first-quarter gains similar to this year’s, according to Birinyi Associates Inc. The index has risen about 7.1 percent in the final three quarters of years following January-March gains of 5 percent to

The benchmark gauge of U.S. stocks is trading for about 13.7 times its companies’ estimated operating earnings, compared with an average multiple of 18.1 times reported profits over the last decade, data compiled by Bloomberg show.

Jobless claims fell by 6,000 to 388,000 in the week ended March 26, the Labor Department said. The median forecast of economists in a Bloomberg survey was for a decline to 380,000 claims. The report comes before tomorrow’s monthly government report on non-farm payrolls, expected to show that the economy added 190,000 jobs in March.

Other reports showed U.S. factory orders unexpectedly fell 0.1 percent after a 3.3 percent gain in January, the Commerce Department said today. The Institute for Supply Management- Chicago Inc.’s business barometer fell in March. The Bloomberg Consumer Comfort Index rose for the first time in five weeks to minus 46.9 in the period ended March 27 from a seven-month low of minus 48.9 the prior week.

Berkshire Hathaway Class B shares fell 2.1 percent to $83.63. Sokol bought about 96,000 Lubrizol Corp. shares in January before recommending the company as a takeover target, according to a statement late yesterday from Buffett, Berkshire’s chairman and chief executive officer. Sokol had initiated confidential talks with Lubrizol the month before.

Berkshire agreed to buy the firm for $9 billion on March 14.

CarMax slumped 7.2 percent to $32.10, its biggest decline of the year. The largest U.S. seller of used cars said gross margin for the fourth-quarter fell to 14.2 percent from 14.5 percent in the year-ago period.

Rowan Cos. advanced 3 percent to $44.18 after Moody’s changed the offshore driller’s outlook to “stable” from “negative.”

The U.S. Department of Agriculture reported corn acreage this year will be the second largest since 1944 as increasing demand for food and fuel cuts stockpiles worldwide.

XL Group Plc added 4 percent to $24.60 after Egan-Jones Ratings Co. said the insurer stands good chance of a takeover by Berkshire Hathaway or other stronger peers.

The rebound in the S&P 500 isn’t over, according to Bay Crest Partners LLC. When the S&P 500 slipped to 1,249.05 on March 16, the weekly survey from the American Association of Individual Investors showed the next day that the ratio of bulls to bears fell to 0.71, the lowest since Aug. 26, Bloomberg data show. Christian Bendixen, director of technical research at Bay Crest, said the increase in pessimism may reverse and help the S&P 500 climb to 1,425, or 7.3 percent above yesterday’s close.

“We have some good reasons to want to own stocks,” said Perry Piazza, director of investment strategy at Contango Capital Advisors in San Francisco, who helps oversee about $3.3 billion of assets. “We know the energy and materials sectors are doing really well, we know the dollar is weak, we know that individual investors are interested again in coming back to the stock market. I don’t think it’s time to take your chips off the table yet.”

We would rather cling to the known than face the unknown – the known being our house, our furniture, our family, our character, our work, our knowledge, our fame, our loneliness, our gods – that little thing that moves around incessantly within itself, with its own limited embittered existence.