Carolann is out of the office today, I will be writing the newsletter on her behalf. A visitor takes a photograph of cherry blossoms in full bloom in the Japanese capital Toyko.
Credit: The Telegraph 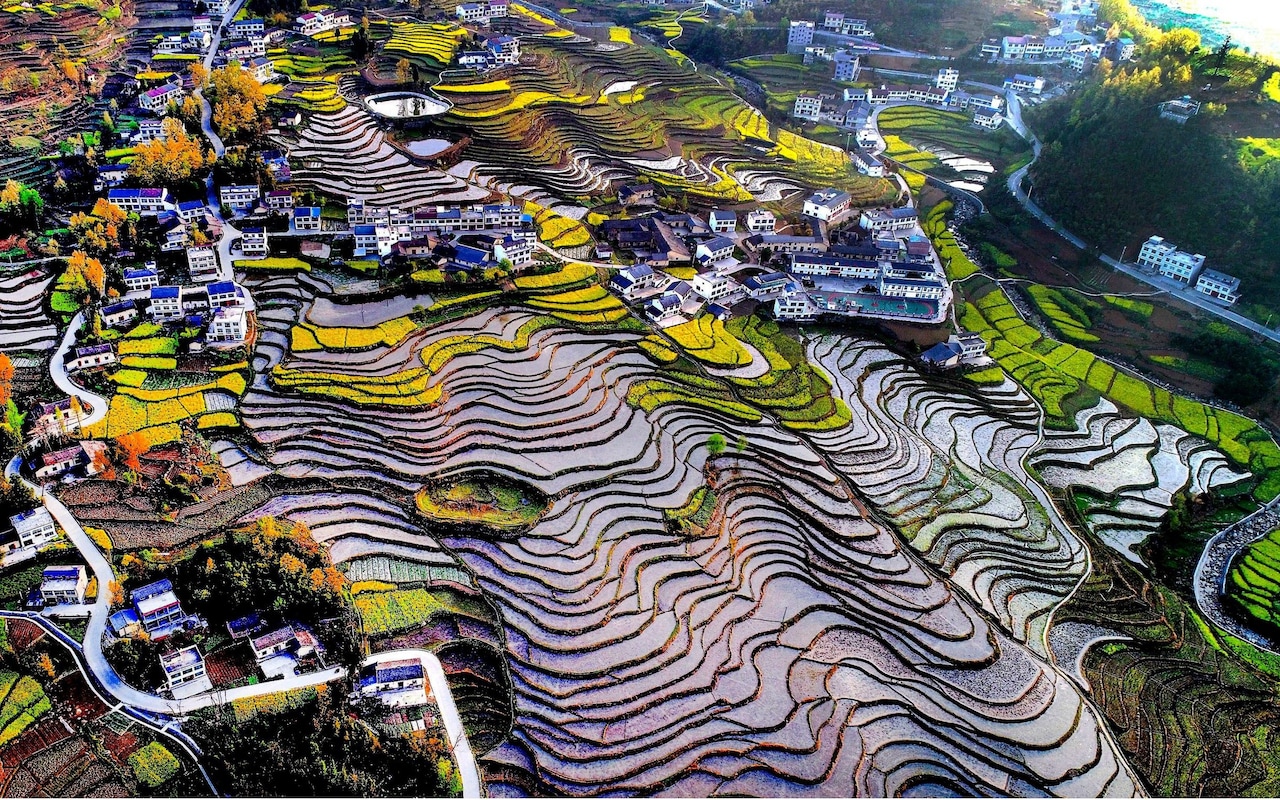 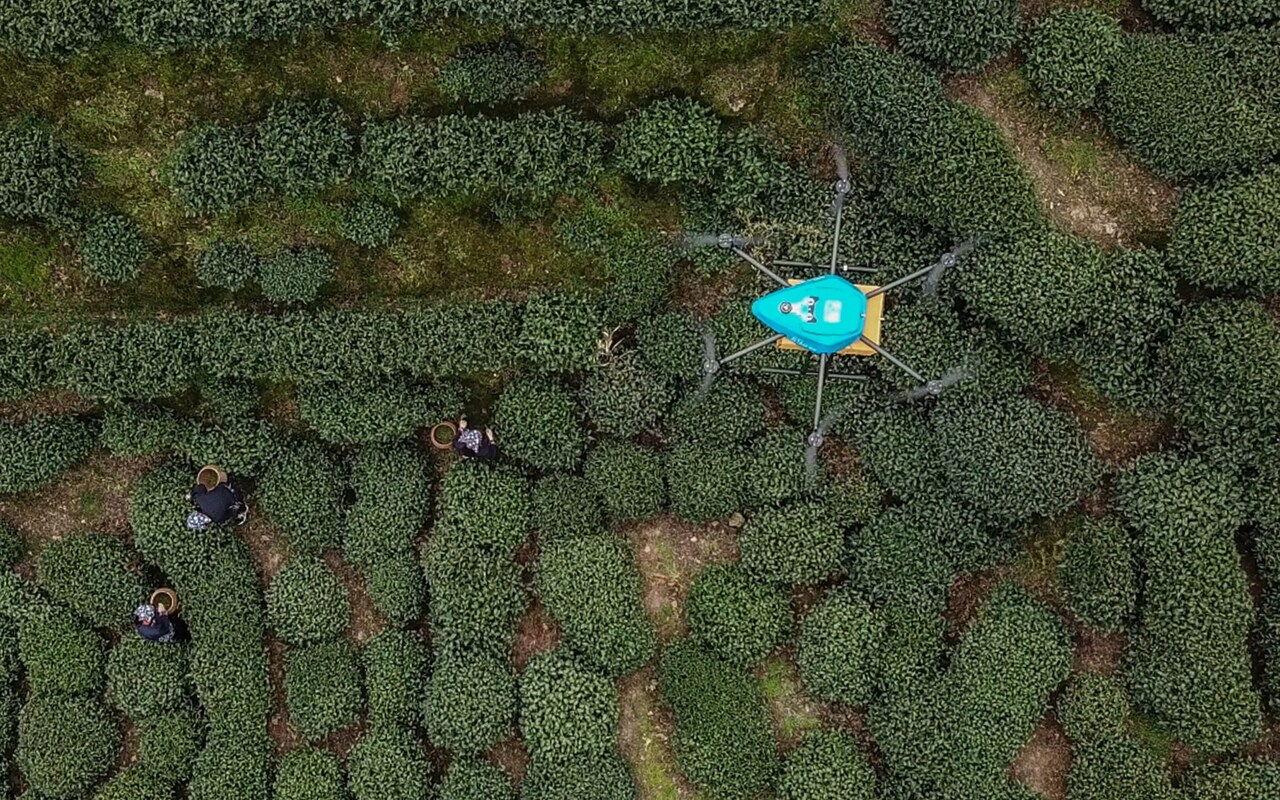 A drone flies over mountains to transport tea leaves at a tea plantation in Hangzhou, Zhejiang Province of China. The drones belonged to Alibaba’s Cainiao Logistics cost only two minutes to fly over the mountains while tea pickers always spent one hour to climb the mountain for tea leaves.
Credit: The Telegraph
Market Closes for March 28th, 2018

Market Commentary:
Canada
By Kristine Owram
(Bloomberg) — Canadian stocks fell for a second day and were on track for the lowest close in more than six weeks as commodity prices retreated and global equity markets were largely in the red.
The S&P/TSX Composite Index lost 25 points or 0.2 percent to 15,190.74 at 9:52 a.m. in Toronto. Materials shares fell 1 percent as copper and gold prices retreated. Torex Gold Resources Inc. lost 7.3 percent.
The technology index fell 0.5 percent amid renewed weakness in U.S. megacap tech shares. Shopify Inc. lost 3 percent, bringing its total six-day loss to 20 percent.
In other moves:
Stocks
* BlackBerry Ltd. rose 1.5 percent after reporting record software revenue
* Badger Daylighting Ltd. jumped 13 percent to the highest in two months. Fourth-quarter earnings per share beat the highest analyst estimate
* Aurora Cannabis Inc. fell 4.6 percent. The company closed its C$1.23 billion acquisition of CanniMed Therapeutics Inc., the largest yet in the cannabis industry
Commodities
* Western Canada Select crude oil traded at a $22.65 discount to WTI
* Aeco natural gas traded at a $1.31 discount to Henry Hub
* Gold fell 0.9 percent to $1,336.50 an ounce
FX/Bonds
* The Canadian dollar weakened 0.3 percent to C$1.2921 per U.S. dollar
* The Canada 10-year government bond yield fell three basis points to 2.12 percent, the lowest since early January
US
By Sarah Ponczek
(Bloomberg) — Megacap tech shares recovered from the worst of their losses Wednesday, helping lift broader equity indexes. The dollar rose while Treasury yields fall as data showed American economic growth beat estimates.
Volatility measures spiked as the Nasdaq 100 Index bounced back from a drop of as much as 1.8 percent. With Netflix Inc. and Amazon.com Inc. still among the biggest losers, the gauge remained on track for its worst month in two years. The S&P 500 Index edged higher, hovering just above its average price for the past 200 days — a level that’s set a line in the sand in the selloffs last week and in early February.
“The return of volatility is something a big number of people in the business have never experienced, but where we are now is the new old normal,” said Don Townswick, the director of equities at Hartford, Connecticut-based Conning, which manages $121 billion.
Treasuries rose, with the 10-year yield dipping below 2.75 percent for the first time since early February, though the buying didn’t bear the hallmarks of haven pursuit. Gold retreated with the yen. Crude slumped below $65 a barrel. European equities advanced after Asian stocks posted broad declines.
Technology shares have suffered the most from investor jitters this month after leading much of the bull-market charge in global equities during the past few years. Pressure has mounted on the stocks amid speculation about a regulatory crackdown related to data privacy and antitrust concerns, U.S. threats to forbid Chinese investments in the sector and a move by traders to lock in their gains after the Nasdaq 100 soared more than 60 percent in the two years through mid-March.
“The fate of equity markets right now, also the fate of the bull market right now, is heavily connected with tech,” Max Kettner, a Commerzbank AG cross-asset strategist, told Bloomberg TV’s Francine Lacqua.
Here’s a list of some of the main events this week:
* The big four euro-area economies are due to release March CPI readings this week.
* The Treasury will probably auction about $294 billion of bills and notes this week, its largest slate of supply ever.
And these are the main moves in markets:
Stocks
* The S&P 500 Index added 0.4 percent at 12:18 p.m. in New York.
* The Nasdaq 100 rose 0.1 percent.
* The Stoxx Europe 600 Index rose 0.5 percent.
* The MSCI Emerging Market Index decreased 1.8 percent to the lowest in six weeks.
Currencies
* The Bloomberg Dollar Spot Index rose 0.3 percent.
* The euro dipped 0.5 percent to $1.2345.
* The British pound declined 0.3 percent to $1.411.
* The Japanese yen declined 1 percent to 106.44 per dollar.
Bonds
* The yield on 10-year Treasuries dipped two basis points to 2.76 percent, the lowest in more than seven weeks.
* Britain’s 10-year yield declined five basis points to 1.36 percent.
* Germany’s 10-year yield was little changed at 0.50 percent.
Commodities
* West Texas Intermediate crude declined 2.1 percent to $63.91 a barrel.
* Gold fell 1.4 percent to $1,326.50 an ounce, the biggest drop in more than four weeks.
* Copper rose 0.1 percent to $3.0025 a pound.

Have a great evening.

“Some things have to be believed to be seen”. Ralph Hodgson