Tangents: Beltane, Wicca.
Walpurgisnacht, Witch’s night, Europe.
We were there last night when the dark drew down:
We set the bonfires leaping.
Then we vanished in the heather and we couldn’t be found until the dawn came creeping.
-Celtic rock group Annwn

On this day in 1803, President Thomas Jefferson signed the Louisiana Purchase, paying Napoleon Bonaparte $15 million for 828,000 square miles of territory.

Some of the works at the Uffizi Gallery, the museum in Florence, Italy, known for its pieces from the Italian Renaissance, can  now be viewed from your couch via the gallery’s virtual tour.  Check it out at http://bit.ly/uffizigallery. 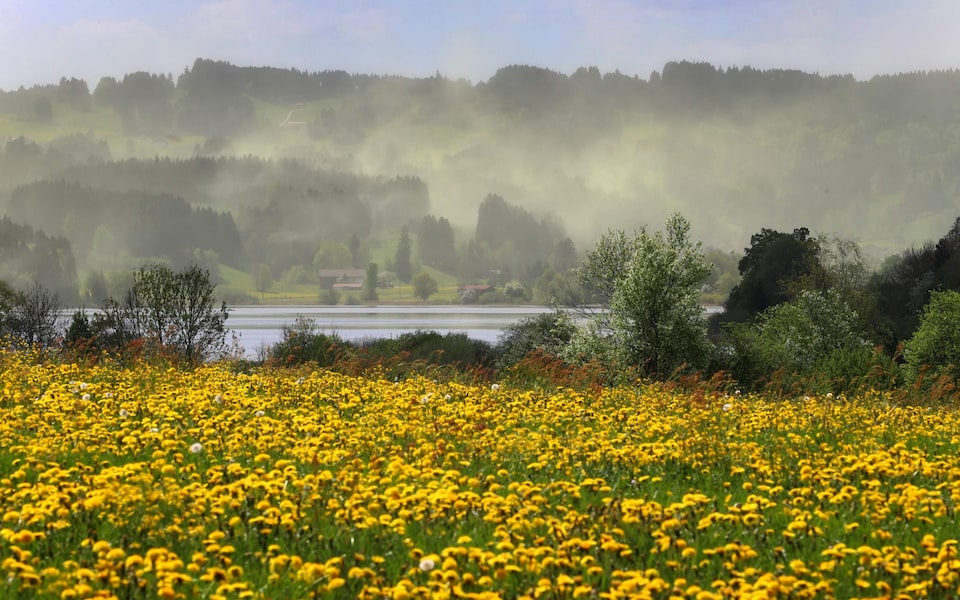 A cloud of pollen swirled by the wind hangs over the Niedersonthofener See lake in Missen near Immenstadt, southern Germany. Credit: The Telegraph 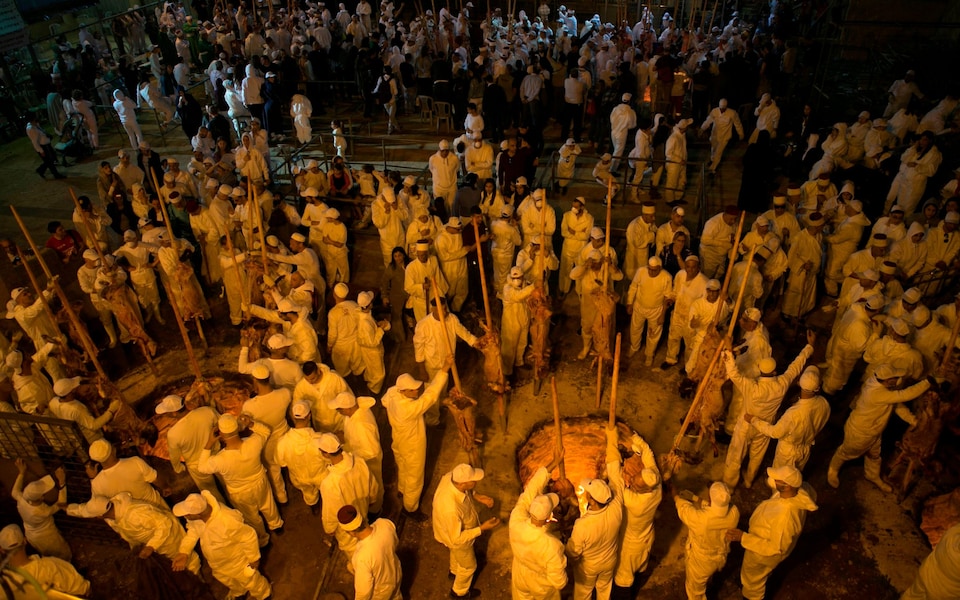 Samaritans take part in the traditional Passover sacrifice ceremony, where sheep and goats are slaughtered, at Mount Gerizim near the northern West Bank city if Nablus. The Israeli Samaritan community which numbers 720 people practices a religion that is based on four principles of faith, one God – the God of Israel; one Prophet – Moses Ben Amram; the belief in the Torah – the first five books of the Bible and one holy place – Mount Gerizim, close to the West Bank City of Nablus. Credit: The Telegraph 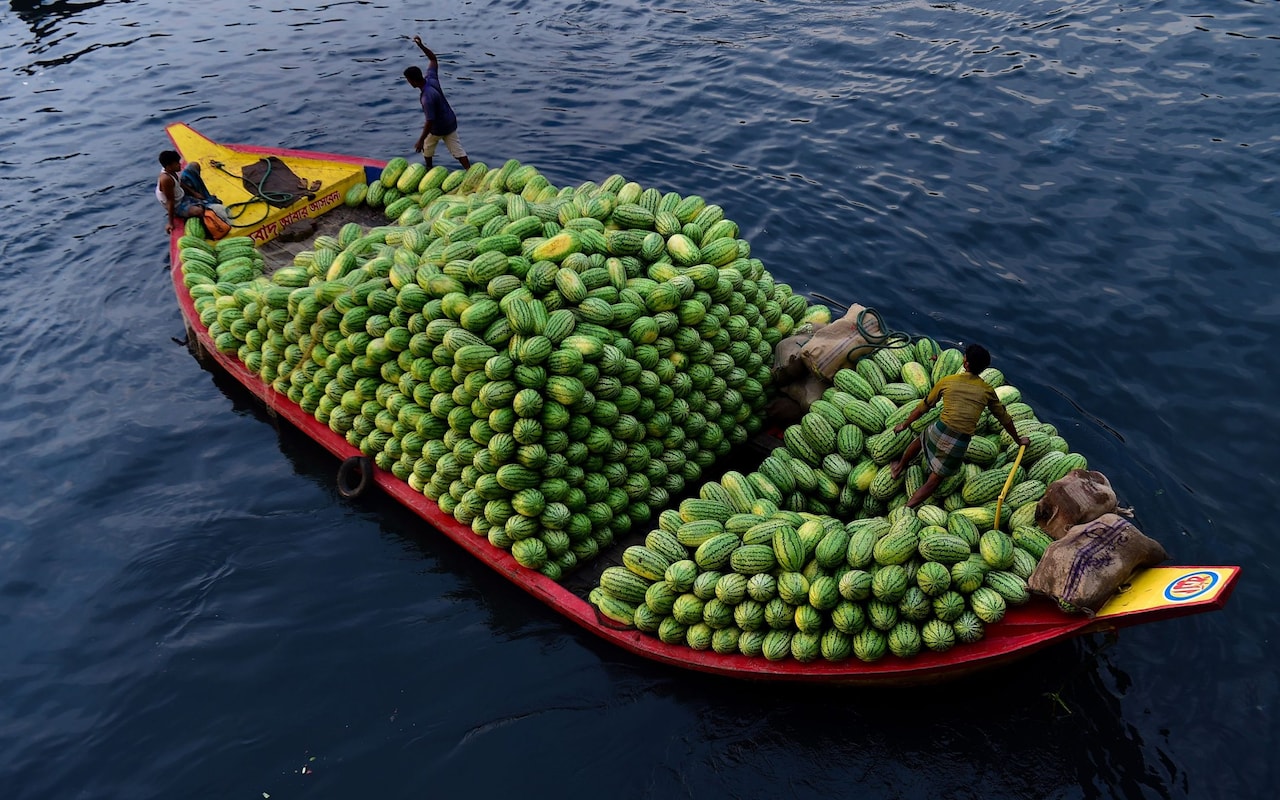 Market Commentary:
Number of the Day
2.3%
Gross domestic product—the value of all goods and services produced in the U.S., adjusted for inflation—expanded at an annual rate of 2.3% for the months January through March, losing some momentum in the first quarter after a spurt of faster growth last year.
Canada
By Kristine Owram
(Bloomberg) — Canada’s stock benchmark posted its first positive month of 2018, ending April with a gain of 1.6 percent even as shares retreated on the final trading day.
The S&P/TSX Composite Index lost 61 points or 0.4 percent to 15,607.88 Monday as trading resumed after a hardware failure at TMX Group Ltd. shut down Friday’s session more than two hours early. TMX shares lost 1.7 percent.
Consumer staples slid 1.5 percent and materials lost 1.2 percent. Detour Gold Corp. was the biggest decliner for the second trading day, falling 5.8 percent on top of Friday’s 32 percent loss amid rising costs.
In other moves:
Stocks
* Aurora Cannabis Inc. gained 6 percent after Australia’s Cann Group Ltd. said it had “very preliminary” discussions with Aurora on a potential deal
* Shopify Inc. rose 5.8 percent ahead of first-quarter earnings Tuesday morning
* Air Canada added 3 percent. The airline’s first-quarter loss was significantly narrower than analysts expected
Commodities
* Western Canada Select crude oil traded at a $17.00 discount to WTI
* Gold fell 0.3 percent to $1,319.20 an ounce
FX/Bonds
* The Canadian dollar was little changed at C$1.2833 per U.S. dollar
* The Canada 10-year government bond yield fell two basis points to 2.30 percent
US
By Sarah Ponczek
(Bloomberg) — A week full of earnings reports and economic data started on a down note, with U.S. stock benchmarks pulled lower by technology and industrial shares. The dollar had its best month since November 2016 while the pound slipped as U.K. Prime Minister Theresa May lost a key ally.
The S&P 500 Index finished Monday at session lows, led downward by stocks including Boeing Co. and Microsoft Corp., while the Nasdaq 100 also sank beneath the weight of broad-based tech declines, including Celgene Corp. Apple Inc., which reports earnings Tuesday, was among the bright spots, as was McDonald’s Corp., which had its biggest gain since October 2015 after reporting solid results.
“People don’t necessarily have conviction at the moment on their holdings,” Joe “JJ” Kinahan, the chief market strategist at TD Ameritrade, said by phone. “Every day, there’s sort of a new sector that’s the sector leading the way. Last year, you knew it was going to be technology or financials, primarily the FANG stocks. Now it’s, ‘Oh no, this. Oh no, this.”’
Some of the inertia in equities may be pinned on recently announced big-ticket takeovers. T-Mobile US Inc. sank after unveiling plans to acquire Sprint Corp. for $26.5 billion in stock. Sprint fell on concern the deal will be blocked on antitrust grounds. Verizon Communications Inc. dropped, too. Marathon Petroleum Corp., which intends to buy rival oil refiner Andeavor for more than $20 billion, also declined.
The 10-year Treasury yield held just below 3 percent after the U.S. Commerce Department reported a pickup in consumer spending in March and inflation hit the Federal Reserve’s 2 percent target, reinforcing the outlook for further interest- rate hikes.
Company results and economic numbers, including U.S. employment figures, will continue to roll in this week, while monetary policy and benchmark yields will remain a major focus as the Fed meets for its next rate decision.
The Stoxx Europe 600 Index rose, and the FTSE 100 Index climbed to the highest in almost three months, with retailer J Sainsbury Plc jumping as it plans to buy Walmart Inc.’s U.K. arm, Asda. The pound dropped after Amber Rudd quit as U.K. home secretary and Housing Secretary Sajid Javid was named her replacement.
Oil gained after Israel accused Iran of having a secret plan to continue building nuclear weapons. Gold fell. Equities in Seoul advanced with the won after North Korea pledged denuclearization on Friday ahead of the upcoming summit between Kim Jong Un and U.S. President Donald Trump.
These are some key events to watch this week:
* The Federal Open Market Committee begins a two-day meeting on Tuesday. The rates decision in Wednesday.
* It’s Golden Week in Japan, with public holidays Monday, Thursday and Friday. China is shut Monday and Tuesday.
* The Reserve Bank of Australia’s monetary policy decision is out Tuesday.
* The European Commission presents its spring economic forecasts, which include projections for growth, inflation, debt and deficit.
* Payroll gains in the U.S. probably picked up in April, with the unemployment rate forecast to drop to 4 percent, according to surveys of economists.
* Earnings season continues, with Apple Inc. headlining. Other high profile results include Pfizer Inc., Merck & Co., HSBC Holdings Inc., Tesla Inc., and BP Plc.
And these are the main moves in markets:
Stocks
* The S&P 500 Index fell 0.8 percent as of 4:03 p.m. New York time.
* The Stoxx Europe 600 Index increased 0.2 percent.
* The U.K.’s FTSE 100 Index increased 0.1 percent to the highest in almost three months.
* The MSCI Emerging Market Index climbed 0.7 percent to its highest in more than a week.
Currencies
* The Bloomberg Dollar Spot Index advanced 0.3 percent to the highest in more than 15 weeks.
* The euro decreased 0.5 percent to $1.2075, the weakest in more than 15 weeks.
* The British pound declined 0.1 percent to $1.3767, the weakest in two months.
* The Japanese yen fell 0.3 percent to 109.32 per dollar.
Bonds
* The yield on 10-year Treasuries fell one basis point to 2.95 percent, the lowest in more than a week.
* Germany’s 10-year yield fell one basis point to 0.56 percent.
* Britain’s 10-year yield decreased three basis points to 1.418 percent, its fifth straight decline.
Commodities
* West Texas Intermediate crude rose 0.5 percent to $68.41 a barrel.
* Gold fell 0.7 percent to $1,315.20 an ounce.
* LME copper rose 0.1 percent to $6,807 per metric ton.
–With assistance from Heejin Kim, Andreea Papuc, Brandon Kochkodin and Eddie van der Walt.

Have a great evening.

Nothing in the world can take the place of persistence.  Talent will not; nothing is more common than unsuccessful men with talent.
Genius will not; unrewarded genius is almost a proverb.  Education will not; the world is full of educated derelicts.  Persistence and determination are omnipotent.  The slogan “press on” has solved and always will solve the problems of the human race.  -Calvin Coolidge, 1872-1933